Stoked to see our bike delivery efforts have been recognized in a recent blog post on BikePortland.org. Here is the link: http://bikeportland.org/2010/03/18/bike-business-entrepreneur-launches-pedalivery-service/

Here is the Story: 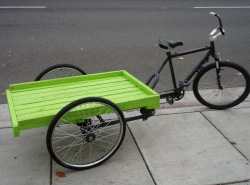 Evan Ross, owner of Portland Bicycle Tours, has added yet another bike-based business to his repertoire — Pedalivery.

Ross already offers bike tours, rentals, bike-share, service and repair from a shop space in Old Town (that he shares with Portland Pedicabs and Icicle Tricycles). Now he’s got a delivery service too. Ross says he launched Pedalivery back in December when his other businesses slowed down in the off-season. “Tours and rentals were slow and I had enough random inquiries and interest in deliveries, so I decided to build a website and roll with this idea.” 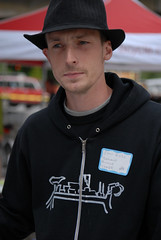 Ross says response has been great so far and he’s getting work delivering everything from freight to food cart orders on his various cargo bikes. He’s got a flatbed trailer, a “pick-up truck” trailer, and several converted kid trailers (that he also rents out).

The cost is $10 per delivery in central downtown (an additional $3 to cross the river to the eastside). “I was worried at first that I needed to charge more,” says Ross, “but people seem to tip well because they understand that I’m human-powered and they like the idea… That’s made the difference, people’s generosity and tips.”

Ross has an intern starting later this month and he plans to keep the delivery service going, even as his other businesses ramp up in spring and summer. “It’s been a real positive response.”

Check out Pedalivery.com for more info.