As you may be aware there are exciting new bicycle projects underway in the Columbia River Gorge, and more on the drawing boards.  In 2013 almost two miles of paved trail was opened in the I-84 corridor completing the connection between Troutdale and Cascade Locks, and providing a much safer and more comfortable route for cyclists and pedestrians

More projects are in the works, including a new trail segment between Wyeth (Exit 51 on I-84) and Starvation Creek State Park (Exit 56 on I-84).  Future projects will include completion of the trail between Viento State Park and Hood River, allowing complete passage through the Gorge without ever having to ride or walk on the I-84 shoulder.  This last segment will include a tunnel, parking and other amenities and will have similar appeal to the Hatfield Trail east of Hood River.  These trails and improvements also provide more parking and access for Gorge area mountain biking trails.

Travel Oregon and the Friends of the Historic Columbia River Highway are supporting research to analyze the benefits of these bicycle enhancements.

If you have ridden a bike somewhere in the Columbia River Gorge during 2013, or bike the Gorge regularly

please help us by going to the link below and completing the questionnaire.

The information you provide is not available from any other source and will be a vital part of the research project.  Your responses will be used for research purposes only and will be kept strictly confidential.

The Text in this post was provided by Travel Oregon, of which Cycle Portland is a strong supporter.

Registration open for next weeks Supper Club – Valentine’s Eve edition. Check out the Event, and get your tickets, limited spaces available!

Join us on February 13th, 2014 for a tasty ride through Portland neighborhoods visiting different eateries for appetizers, entrees, and dessert. Bring your valentine and prepare to mount up on a journey to satisfaction.

Tickets are $50.00 each and include appetizers, Dinner, Desert and guided ride. This is a small group event and there are only 8 tickets available.  Register Here!

This month’s episode shares the locavore love of inner SE, with a pre-valentine’s river rendezvous culminating in our first course: Ford Food and Drink! Located in the historic Ford building, appetizers and architecture make a perfect pre-meal pair.

Next we’ll sidle up to our sultry second stop: Portobello. Ranked one of Portland’s top restaurants by Willamette Week, we’ll feast on phenomenal gastronomical fare catering to people of all eating proclivities.

So sign-up to ride the romance, with our Valentines Day bike tour, eat all the things, and enjoy a frolicsome eve with fellow friendly two-wheeled revelers.

Because we want to ride bikes with you.

Please specify if you are vegan, vegetarian, or have any dietary restrictions so we can ensure adequate deliciousness for you! After registration, you will be asked to pre assemble your order based on a list of menu items provided from each location.

Bring your own bikes, or if you would like to rent please contact us at [email protected] prior to the event. Helmets are not required, but strongly recommended. Front and backlights are required, but we have some to lend you if you don’t have any.

Bike Ride starts from Cycle Portland Bike Shop at 117 NW 2nd Ave. and is a loop, returning to the same point. Participants have the option to leave the ride and go on their own way at the last stop if they do not need to return to downtown. On street pay parking is available and becomes free after 7 pm if you need to drive.

Ride is rain or shine, and will only be cancelled in the event of un-safe riding conditions usually in conjunction with ice, snow, or a zombie apocalypse.

If you need to cancel your reservation we will provide you with a refund if you give us at least 48 hours notice. Cancelations inside 48 hours will not be refunded.

A while back we gave a private Mt. Biking tour to a visiting travel writer Ronald Jacobs and he forwarded on the article he had published entitled DE OVERTREFFENDE TRAIL VAN MOUNTAINBIKEN. We had a great time with Ronald at the Sandy Ridge trail system and loved to see the photos of his adventures in Bend. The attached article below is in Dutch and gives a great overview of his trip to Oregon. Check it out!

Join us today  at 3 and 6 pm at the Hopworks Bike Bar at 3947 N. Williams for Free Group rides to the BiketoBeer Fest celebration!

The World’s Only Bike-In Oktoberfest Party 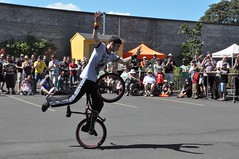 Check out the latest Huffington Post Travel article on Bikes and Beer, featuring our Brewery Tours!

Beer-lovers are finding a new way to explore the burgeoning craft-brewing world: on bicycles.

From Oregon to New Mexico to Vermont, beer aficionados can now hop on a bike and be led from one brewery to another. After sampling the latest microbrew, they can then pedal away all those extra calories.

The tours – which range from a few hours to several days – offer a chance to meet other travelers, learn about the local culture and, of course, sample some great beer. And each tour has a different strategy for preventing biking under the influence, from limiting tastes to 4 ounces and providing a back-up van, to saving the swigs for the end of the trip.

Heather Wess Arnold and her husband Josh, owners of Routes Bicycle Rentals & Tours in Albuquerque, took their love for beer and biking and combined them in a tour in April.

“We were expecting it to be mostly tourists, but it’s also been a lot of locals,” she said.

Novice riders will appreciate the bicycle-friendly paths, lanes, roads with light traffic. Beer-lovers can enjoy visits to at least three breweries. The $45 tours – rental included – are offered the third Sunday of each month.

Every three months, the tour is changed so people can learn about new neighborhoods and new beers. The three-and-a-half to four-hour tours cover 10 to 15 miles.

Along the way, bikers learn about the history of brewing in Albuquerque, some local trivia and are given backroom tours of the breweries, led by the master brewers. Some of the spots even let bikers participate in the process, adding the hops or stirring the mash.

There are three to four tastings – each 4 ounces – at each brewery. Plenty of water is served and Wess Arnold says the tour spreads out the drinking to keep bikers under the legal limits of driving – um, biking – while under the influence. A vehicle follows the group in case anyone becomes too impaired to bike.

“So far that hasn’t had to happen,” she said.

The vehicle also offers a way for bikers to transport any six-packs or growlers of beer, T-shirts and pint glasses without worrying about juggling the souvenirs on the bikes.

For those looking for a bit more of a challenge, Sojourn Bicycle Vacations offers a Vermont Bike & Brew tour. The six-day, five-night trip is geared toward more avid cyclists who ride 50 miles a day and includes many hills.

“It just combines some great riding and some of the world’s best craft breweries,” said Susan Rand, president of the company. “We do more riding than drinking.”

The group stops at seven breweries along the way, but also ends each day with some local beers out of a cooler. One night, there is a private chef’s beer-pairing dinner led by the brewmaster from Otter Creek Brewing.

The 18-person trip, which goes for $2,195 per person, covers the rural back roads of Vermont.

Bob Gross, 63, and his wife Cyndy, 54, were on the first tour last summer. They’ve done wine bike tours but thought it was time to learn more about beer. More than 20 years ago, she bought him a home brewers kit and he’s been hooked ever since.

“I like specialty beers, I love microbrewers,” he said. “All our bike trips gravitate toward alcohol.”

She loves Michelob Ultra but went along on the trip since they bike together two to three times a week.

“The cool thing about the trip, you got to meet the brew masters. You learn a lot about the business,” he said.

As for getting drunk while biking, he said, “You’re just really sipping a very small amount.”

Most of the drinking happens at the end of the day.

Mount Major Adventures offers customized Vermont Bike and Brewery tours that visit more than a dozen breweries in the state over a four- to eight-day period.

Too exhausted to think about that much biking? Well, there are plenty of other day trips out there including those offered since 2008 by Cycle Portland Bike Tours in Oregon.

Owner Evan Ross sums up the tours as a great way to “work off some calories and build up some thirst.”

The group visits three breweries over three hours and then ends in the bike shop where there is a keg of beer from another local brewery. Like all of the tours, Ross tends to change the beers with the seasons and his tastes.

The $40 tour used to include alcohol, but Ross said “people got too wasted.” Now, participants purchase drinks a la carte along the way. This way, no one feels like the need to finish every beer to get their money’s worth.

Other companies around the country offering similar trips include Beer & Bike Tours in Fort Collins, Colo., and Motor City Bike & Brew Tours in Detroit, which focus on the city’s brewing revitalization as well as sites from the Prohibition era.

Scott Mayerowitz can be reached at . http://twitter.com/GlobeTrotScott

Join us for the 7th annual Pacific Crest Trail Days in Cascade Locks, Oregon. Have you experienced the trail? We gather to welcome those who are passing through on their 2,600 mile journey from Mexico to Canada and to recognize how this amazing path has touched our lives. See you there!

Thanks to Fitness Magazine for mentioning our Essential Portland Tour and our Breweries By Bike Tour. Horrah! Check out the article and look us up next time you are visiting Portland.
“Pedal like one of the locals on some of Portland’s more than 315 miles of bikeways.  Choose Portland Bicycle Tour’s  Essential Portland Tour to see the culture-rich Pearl District, the waterfront esplanade and  more, or opt for its Portland Brewery Tour to sample a few of the almost 50 breweries… ” 083-0713TRAVL