Who knew? Evan get’s listed as “Craft-Brew Aficionado”.  Time magazine just interviewed us again about our Breweries By Bike Tour and included a quote in their latest issues Travel section story called “Just Brew It” -Together at last: Fresh air, exercise, and beer. Check it out!

Do like the Stumptown locals: How to explore Portland by bike

Special to The Globe and Mail

My trips to Portland have always been active and outdoorsy: I’ve actively hunted down the city’s brilliant microbreweries and I’ve greedily eaten outdoors at many lip-smacking street food stands. But through my calorific haze, even I’ve noticed that steely-calved Stumptowners spend a lot of time in the saddle.

Oregon’s biggest city is a cyclists’ haven. With more than 500 kilometres of trails, Bicycling magazine frequently names it one of America’s pedal-friendly capitals. I touched base with local Jonathan Maus – founder of popular blog Bike Portland – to get the inside track.

First off: where to rent. There are many places to hire wheels, but Maus suggests one that quickly connects you with the locals. “Cycle Portland Bike Tours in Old Town. Owner Evan Ross is a true gem in the community and he’s got a range of bikes that help you blend in with the locals. The prices are hard to beat, too.” See their website portlandbicycletours.com.  More…

Happy Pedalpalooza! We’re smack dab in the middle of Portland’s three week bike festival and about to lead our own Free Annual Ride – Biomimicry on Bikes! All you have to do is show up and ride. Arrive early if you need a rental bike and we’ll get you set up.

(At the Intersection of NW Couch and NW 2nd Ave.)

Annual Biomimicry on Bikes experience. ” To Planet Repair Institute… and beyond! ” Join us on this casual ride along the Springwater to visit the Planet Repair Institute, a living, breathing node for Neighborhood Repair, embedded in the neighborhood of Sellwood, Portland OR! We will ride to the site for an introduction to the project and brief tour. Then we will engage in a satisfying potluck picnic before returning to downtown Portland. Bring an afternoon snack, or something to share!
Cycle PDX, info

Join us at Mt. Tabor for the best dressed Bike Ride in town. Route is under 10 miles and includes prizes for the most dapper!
The details:
TWEED RIDE PORTLAND 2013
Sunday April 7
Mount Tabor Park, SE 69th Ave and Yamhill Take Trimet (Meet at pavilion at north side of park, near basketball courts.)
2:00pm
After party at Velo Cult.
http://www.shift2bikes.org/cal/viewmonth.php?month=4&year=2013#07-3463 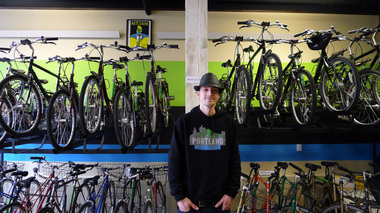 Five years and three locations — if you count his basement — later, Cycle Portland Bike Tours has 45 bikes to rent, five employees, and offers 12 tours, a bar with coffee, tea and microbrews as well as bike repair and supplies.

The bike rental and guided tour business last month moved around the corner from its previous Northwest Everett location to a space three times the size at 117 N.W. Second Ave. The television show “Grimm” used the vacant storefront as a location to film scenes of the show’s Exotic Spice & Tea Shop.

“This is a really important location for me,” Ross says, as he looks at expanding his customer base of tourists and regulars. A big marquee sign is visible from the MAX red line advertises “Cycle PDX.”

“A lot of people rent bikes instead of cars when they visit,” Ross says. They’ll take the red line in from the airport and grab their ride on the way to lodging.

The new store is also close to college students — University of Oregon and Oregon College of Oriental Medicine, both on Northwest Couch — who need rentals or bike maintenance, and famous tourist attractions like the waterfront, Voodoo Doughnuts, and Portland Saturday Market.

More surrounding attractions also mean more partnerships with mutual product pushing. Ross notes the pile of fliers on the bar for attractions like The Faux Museum, at 139 N.W. Second — “the world’s oldest museum,” reads the slogan. And “so Portland,” Ross says, for his customers.

Ross’ business strategies seem to be working: Every year since 2008, when the business became official, it has grown 40 to 50 percent. Granted, it started at zero, Ross says. But higher oil prices, more interest in eco-tourism, and concern with obesity created a perfect storm to boost the business from two bikes in 2007 to 30 in 2008. About half his tourist clientele comes from out of country and half from the U.S.

Ross, 29, conceived Cycle Portland Bike Tours — originally Portland Bicycle Tours and now undergoing rebranding — after taking bike tours as he traveled around the world. He returned to Portland and saw a gaping hole in the tourism offerings: No bike tours in the (now) most bike friendly city in the country.

“The thing about Portland bike culture is once you dip your toe in, it’s all or nothing,” Ross says 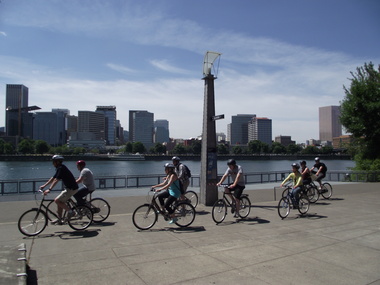 He hunted for bikes at garage sales, teaching himself how to maintain them through the season. He then sold them each winter to buy more and better products for the next spring touring season.

Now he has enough bikes in different sizes for tourists, wedding parties, executive retreats, or city planners interested in Portland’s infrastructure, another of his self-taught specialties.

And last year he organized and led a ride with Gary Fisher, a member of the Mountain Bike Hall of Fame, for the Filmed By Bike Festival, a film festival of bike-themed short movies.

“I was riding downtown with a couple hundred people behind me and the sun in my face,” Ross says, “and I thought, ‘Yeah, this is what I’m doing.'”

Passing this along from the Shift List here in Portland, enjoy!

Ready for more awesome architecture? Meet up Saturday 23 March at ~1 PM at the food carts at 23rd & NE Alberta and we’ll check out fabulous edifices in Alberta and Concordia: a tiny home, the Sabin Green cohousing, a hacienda infill, a platinum LEED and a hand-made modern, plus the world-famous Stump House (as seen in Dwell!)–PLUS alley2alley cruising!  This easy, slow, laid-back ride (~ 8 miles max) covers three loops: choose your distance & hill preference (or hang out at the food carts). More fun than educational; ends at the Mash Tun for beer and nosh (bring some cash).

Cycle Portland Bike Tours is inviting the public to help them celebrate their expansion and opening of a new location in Old Town at 117 NW 2nd Ave. Tour the shop and meet local bike powered entrepreneur Evan Ross during this months First Thursday Art Walk Event on March 7th 2013 from 5 – 9 pm. Join Portland’s oldest and most celebrated Bike Tour company for an Oregon Microbrew from the new mini-bar, featuring beers from Hopworks Urban Brewery and check out the new Cycle Portland Visitors Center, offering guide books, suggested tour routes, and a map printing station for travelers from around the world.

Based in Old Town, Cycle Portland Bike Tours has been helping visitors explore America’s cycling capitol since 2007 with sightseeing and culture tours of Portland’s urban areas as well as extended trips to Oregon’s Wine Country and Columbia Gorge. Tour themes include historical and cultural perspectives as well as visits to Portland’s famous breweries, food carts, and doughnut shops. Custom tours are always available and have ranged from Coffee and Chocolate Tasting, to Portlandia Show Tours, and even Simpsons themed rides.

Evan Ross, a Cascadia native started leading sightseeing tours by bike in 2007 after earning a degree in Outdoor Leadership, and traveling the world- taking bike tours in Asia, Europe, and Central America. He returned to Portland to find that no one provided this simple service – taking visitors on casual rides to experience the vibrant city or beautiful countryside. Ross saw the opportunity to start a carbon neutral business that provided a real benefit to the community-by showing examples of livable streets and healthy neighborhoods in a true leadership by example model. Customers of Portland Bike Tours choose to rent bikes for transportation instead of renting a car and help reduce their vacation’s carbon footprint while getting some light exercise instead of sitting on a tour bus. “ Providing affordable transportation and recreation opportunities for visitors and locals alike has always been the mission” says Ross, “and the sustainable tourism economy is booming – more and more people want healthy, green, and affordable family activities when they travel. That great, because that’s what we do. ”

weather you live in Portland but have friends that are visiting, want your bike serviced while at work downtown, or just want to know more about cycling the city you live in- Stop by the new shop for free smiles, friendly advice, and all the bike commuter accessories you need to Cycle Portland. More information and tour tickets available at www.cyclepdx.com

After five years in our old location Cycle Portland Bike Tours has re-located to a larger storefront space at 117 NW 2nd Ave. Portland Oregon 97209. Just two blocks away from our Everett St. location, the new shop has a larger bike service area, more rental bikes, a Visitors Center with map printing station and now OREGON MICROBREWS ON TAP! Thanks to all of our friends, community partners, and customers who have helped us grow over the years. Stop by the new space to say hello and see the new digs. Ride On!